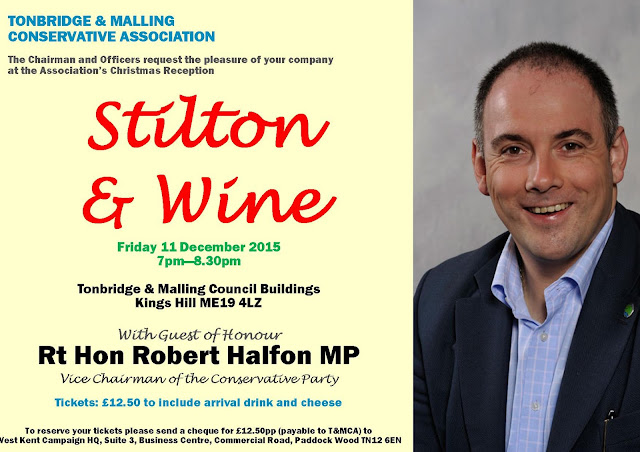 The Chairman and Officers of the Association are delighted that the Rt Hon Robert Halfon MP (Vice Chairman of the Conservative Party) will be guest of honour at a Christmas Reception, to be held on Friday 11 December 2015 from 7pm - 8.30pm in the Tonbridge & Malling Council Offices, Kings Hill, ME19 4LZ.

Tickets for this event are just £12.50 per person, to include an arrival drink and a selection of cheeses. During the course of the evening, Robert will be invited to draw of winners of the 2015 West Kent Christmas Draw.

To reserve your place please send a cheque for £12.50pp (payable to T&MCA) to West Kent Campaign HQ, Suite 3, Business Centre, Commercial Road, Paddock Wood TN12 6EN. It will save you the time and trouble of finding your cheque book if you paid online, using our secure server - see below.

Posted by West Kent Conservatives at 08:55