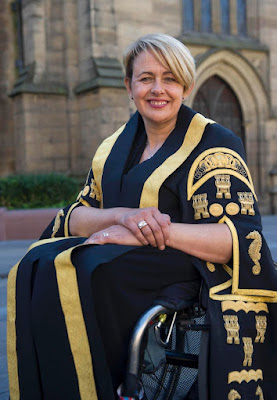 Tanni Grey-Thompson was born in Cardiff in 1969. She was born with spina-bifida and has been a wheelchair user since childhood.

Tanni’s athletic career started in 1984 at the National Game for Wales. Her success nationally
propelled her to the international stage at the 1988 Olympic Games at Seoul, where she won a bronze medal at 400m, also competing at wheelchair basketball at Olympic level. She retired from international athletics at Athens in 2004, having competed at 5 Olympic Games. Over that time she won sixteen Paralympic medals, including 11 gold, six silver and one bronze. She held 30 world records and also won 13 World Championship medals. She also won the London Marathon six times between 1992-2002. Tanni is the worlds most successful Paralympian.

After her retirement from athletics She became a leading sports commentator for BBC and S4C. She was elected to the Board of the National Disability Council, the English Lottery Awards Panel and UK Sport. She is a board member of the London Marathon and is responsible for advising on
disabled access at Transport for London. Since 2015 she has been Chancellor of Northumbria
University.

In 1993 she was awarded the MBE for services to sport, this was advanced in 2000 to an OBE, then in 2005 a DBE (Dame Commander of the Order of the British Empire). In March 2010 she  was elevated to the House of Lords as Baroness Grey-Thompson of Eaglescliffe in the County of Durham. She sits as a Crossbencher.

Tanni has won BBC Sports Personality of the Year three times,  serves on the international
commission investigating doping in sport and was voted one of the UKs 100 Most Powerful Women by BBC Radio 4.

We are delighted that Baroness Grey-Thompson has accepted our invitation to come to Tonbridge.

An Audience with Baroness Tanni Grey-Thompson  DBE DL will be held on: Tuesday 19 June 2018.

Tickets for the show only are £10.00 per person which includes a complimentary arrival drink from the bar.

To reserve your ticket(s) using a credit or debit card please see below:

Posted by West Kent Conservatives at 11:48